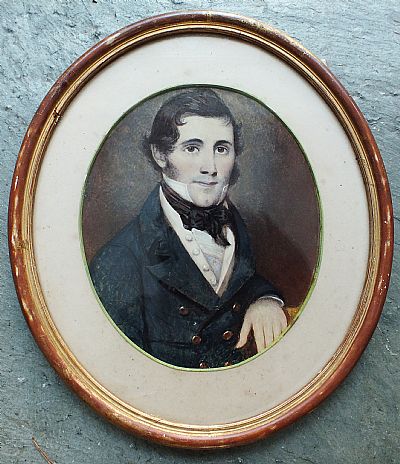 I purchased this portrait of Angus Macdonell in April 2008 without any real knowledge of who he was. Notes on the rear of the picture frame were of assistance, but were not conclusive.

Many years later, and with the assistance of The Clan Donald, I was finally able to piece together his family story. Much, but not all, of what follows is based on The Clan Donald record. Other sources, W.I.Scott K.C. for example, challenge the accuracy of parts of The Clan Donald, and in acknowledging this I have endeavoured to draw some form of consensus.

Angus was the great great grandson of Ranald II of Scotus.

Ranald II of Scotus who, in 1680, succeeded his cousin Angus, Lord Macdonell, to the Estate and Chieftainship of Glengarry, had five sons by his wife Flora, daughter of John Macleod of Drynoch. His eldest son Angus succeeded his father in his Estate of Scotus.

Angus of Scotus (1660 - 1746) married Catherine (1666 - 1761) daughter of Sir Norman Macleod I of Bernera (and widow of Alexander Macleod of Raasay) and had by her four sons. Three of these sons, Donald, John and Allan, were all out at Culloden. It is believed that Donald, the eldest, perished on the field.

Angus married secondly, and had another son Alexander, a priest, known as Maighstir Alastair Mor. He was the spiritual leader of the 1786 emigration from Knoydart to Quebec on the Macdonald.

The third son of the first marriage, Allan (born c 1697 at Ardnabee), was styled I of Ardnaslishnish . There appears to be some uncertainty as to whether his children were all from his marriage with Janet Chisholm (1703 - ?), or whether there was an earlier  marriage. One source advises that his daughter Flora Roy, and his son John (sometimes referred to as James) were from a first marriage and that a son Angus "MacAileen" and a daughter Mary were the children of his later marriage to Janet Chisholm.

John (James) II of Ardnaslishnish, described as a distinguished and loyal British officer, who settled in Montreal after the American Revolutionary War, married Madelaine Robert (a French lady). Their only son Angus (born c 1788) is the subject of our portrait. This would make him Angus , and possibly last, of Ardnaslishnish. He was thus a first cousin of Bishop Alexander Macdonell and a second cousin to Miles Macdonell, son of Spanish John.

In Montreal on the 3rd March 1821, Angus of Ardnaslishnish  married Mary, eldest daughter of Captain Alexander Chisholm (c1740-1813) and his wife Margaret Fraser (1760-1810) of Ballindown. They had a son and three daughters. The son and one daughter died young. Of the remaining two daughters, Louisa Maria married, in Canada, John Matthuis Craufurd (with issue) and in 1861 in Vienna, Upper Canada, Annie Cecilia (1833-1905) married James Sutherland Chisholm of Chisholm (1806-1885).

Annie Cecilia and James were distantly related. They had a son Roderick (1862-1887) and three daughters, Mary Isabella, Louisa Jane and Annie Margaret, but by 1887 James and all the children had died.  Annie Cecilia Chisholm of Chisholm lived for a further 18 years and was the last of that name to reside at Erchless Castle. She died in 1905.

By one of those rather curious coincidences I have in my possession an Assignation of Lease, dated 1883, in favour of my great grandfather Donald, for that part of the farm and lands of Incheahard and Glackghoil of Buntait in the parish of Kiltarlty. The document carries the signature of both James Sutherland Chisholm and my great grandfather, who styled himself Donald McDonell (although the document refers to him as Donald Macdonell). One of the witnesses to Donald's signature was William Macdonell, farmer, Buntait (See also Silver Coins Corrimony article on CDSH&I website). William's signature is dated 12th September 1883, less than three weeks before his death. 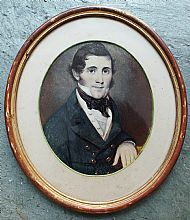